If you are a python programmer then you might hear about API integration in python. It helps in adding features to your program easily. In real life, we use many applications that mostly work with the help of API. So now you will be thinking What is API? How it works? or How we can use it in python? Don't worry today, in this tutorial we all explain to you everything you should know about the API integration in python programming.

Let's get started with What is API?

What is an API?

API stands for Application programming interface that allows two or more applications to interact which each other. Suppose you are creating an application related to taxi services than to get the address of the passenger you will use the Google Maps API. Your application is interacting with Google Map API. Another example is When you use Facebook and sends a message to someone you are using an API.

API is basically a server that is used to retrieve or send data using specific lines of code. It is mostly used for retrieving the data and to retrieve data we have to make a request to the webserver.

To know about the working of an API here is a quick example. When you use some application on your phone the application first connects to the internet. Now from the internet, it sends data to a server. The server retrieves back the data with actions to your phone. This is how API is working and helping your mobile phone interacting with the server. 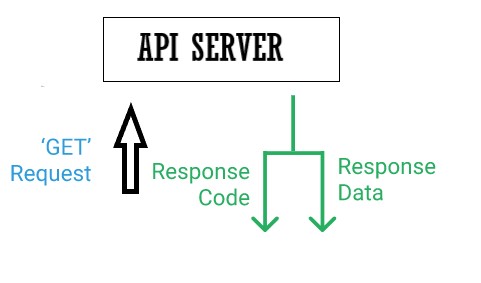 Uses of an APIs

There are several platforms where APIs are used. We are going to highlight some of the best cases where API is used to interact with data or servers.

If there is a continuous change in your data for example stock price data, live population data, etc. This type of data cannot be regenerate and download again and again because it is slow and consume a lot of bandwidth. APIs are an easy method to handle this type of data.

APIs are also used to handle continuously repeating data. For example, Spotify has an API that tells you about the music. You can create your own music categories by using your own classifier but will never have much data as Spotify.

API also helps you in fetching a part of data from a larger set of data. For example, if you just want to pull down comments from Reddit. You can easily fetch only comments with the large data of Reddit.

We all know that python is mostly used in web and other hosted applications. APIs are also mentioned as 3rd party services and are used in python to interact with different servers. Stripe used for the payment process, Social media applications used for sending messages are real-life examples of APIs integration in python.

If you are a beginner and want to learn explore API integration in brief. Check out this video tutorial.

Constructing your own API library

You can create your own API library by following a few steps. Also, if you want to make API for different communities or people then also you have to learn to work with API libraries.

The structure of your API library depends upon the working and how your API authenticates. Also, instead of thinking about HTTP endpoints, you should create your own internal API easily. If you want to start building your own API library you can check out this tutorial.

Building your own API library in Python

API integration briefly explained with examples and tutorials. Create your own API in just a few steps. Learn from basics to advanced .