Hello Guys in previous post we learnt how to show google maps in flutter. In this post we are going to learn about how to show multiple markers on the map

Here we are using google_maps_plugin to show Google Maps.

GoogleMaps widget contains property markers, with this we are going to show the Markers on Map.

So let's add Markers to Map.

How will create Markers?

So here MarkerId("Current") is the Marker Id for the Marker.

We  can differ this in below way

To add these markers to GoogleMap  markers property we need to pass it to Set type.

So let's create a HashMap of Type Markers and add these markers to it.

Now we are ready with our Marker data, we need to pass this marker data to GoogleMap Now let's run the app, you will able to see the Marker on the Map. 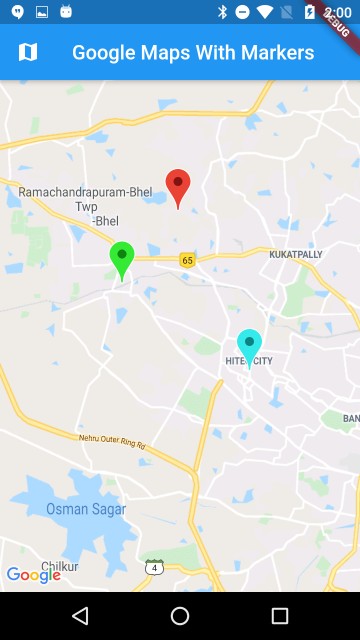 How to add Multiple markers?

So now we are able to see multiple Markers on Maps.

How to add InfoWindow for markers? Marker() has property with infoWindow, this infoWindoe has properties like title,snippet,....

How to add Event For infoWindow? With the onTap functionality of InfoWindow, we can handle event for infoWindow Here we are showing the BottomSheet window on tap on infoWindow of Marker

Let us see the complete code